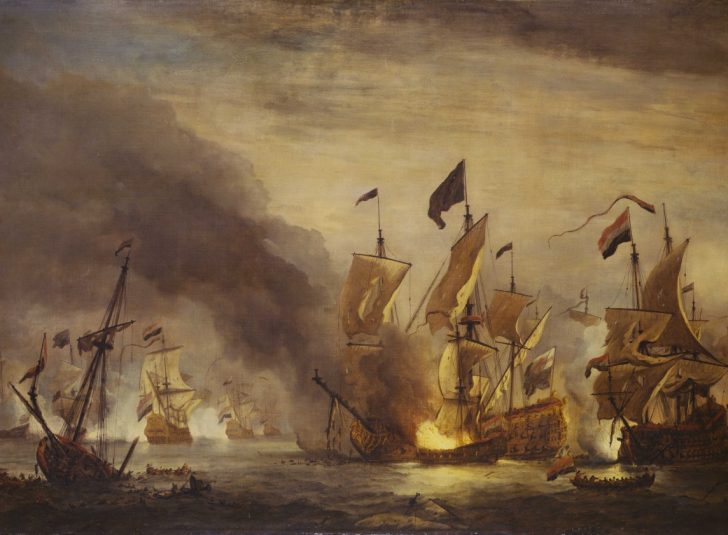 Our Great Sea Fights series continues on the 350th anniversary of the Battle of Solebay, fought between the Dutch and the allied English and French off the eat coast of England, and one of the hardest-fought battles of the Age of Sail. To find out more Dr Sam Willis spoke with Dr David Davies, historian and author of the Journals of Matthew Quinton, a series of historical novels set in the seventeenth century navy.

This was a fascinating and important period of naval history when so much was still being learned about how to actually fight at sea in broadside-armed ships, and in particular in enormous fleets: in this battle the Dutch had 75 ships and over 20,000 men and they took on a combined fleet of 93 ships and over 34000 men – that’s 108 MORE ships than fought at the Battle of Trafalgar in 1805. It is also an unusual example of the English actually co-operating – or at least trying to – with the French.

The battle was fought during the third Anglo-Dutch war, a prolonged period of intense commercial rivalry between European powers which had begun some twenty years before hand with the First Anglo-Dutch war in 1652. By 1672 both sides had landed mighty blows but the Dutch and English engines of war that were producing ships and keeping them at sea was now working as well as it ever had, and to complicate matters the French now had a formidable fleet of their own.