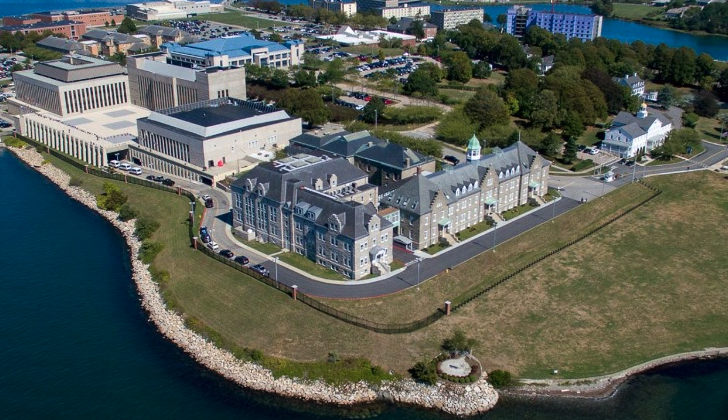 This week we are exploring the history of how to become a naval officer, with particular focus on the American experience and the foundation of the Naval War College in Rhode Island. Established in 1884 the U.S. Naval War College offered professional study for naval officers and now offers advanced courses of professional study for all services, U.S. government agencies and departments, and international navies.

In our modern world media interest on naval power tends to be directed towards materiel rather than personnel: recent news stories, for example, have focussed on the USS Nevada, armed with no fewer than 20 Trident II strategic nuclear missiles recently surfacing at the American naval base in Guam in the Pacific – a clear demonstration of strength or in the official wording – of ‘readiness and commitment’ – towards China and North Korea. We do not hear, however, about the personnel wielding this naval power. No news stories ran a feature saying that a particularly successful or maverick or reliable naval officer had been sent to Guam; all we hear about is the submarine.

This is notably different to the way that naval power appears in history, as it is dominated by personalities, whether it is the American Chester Nimitz in the Pacific theatre of the Second World War, one of his great rivals the Japanese Chuichi Nagumo, the British Beatty and Jellicoe, in the First World War, Horatio Nelson, John Paul Jones, Francis Drake, …and so on.

So how does the US Navy try to guarantee the competence of the men who lead their fleet now – and how did they do it in the past? To help me find out more Dr Sam Willis spoke with Dr Evan Wilson, Assistant Professor in the John B. Hattendorf Center for Maritime Historical Research at the U.S. Naval War College in Rhode Island.