The Sinking of the Galleon San Jose on 8 June 1708: an Exercise in Historical Detective Work 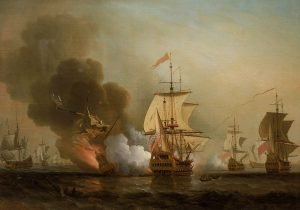 In 1708 a Spanish fleet sailed from the Isthmus of Panama to Cartagena on the northern coast of South America carrying a large amount of gold, silver and other valuables. The Spanish ships were attacked by an English squadron and following a battle, the Spanish flagship San José exploded and sank. No-one knows exactly where the encounter took place. Through a detailed examination of the logs of the English and Spanish ships involved and with the aid of modern plotting techniques, it is now possible to identify a probable area where the San José was sunk.  The article reviews a brief history of the sinking the San Jose and tries to provide some location for her sinking, by using references of historical data, such as English and Spanish log books. The logs provide bearings and visual references, together with a time/ date reference, whilst being aware of their limited scientific knowledge and accuracy. The article provides a modern map reference to cover an area of 25 nautical miles, with the strong caveat that this is based on data recorded from primitive navigational equipment and techniques.