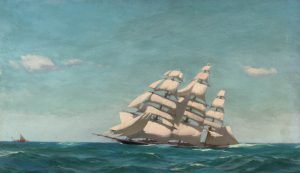 Born into a farming family near Auchterless, Aberdeenshire in 1760 Alexander Hall junior was “put to trade” of cartwright and ploughwright, as a boy, learning to handle tools and the working of wood and iron. Leaving country life at the age of 23 he found employment with Alexander Gibbon, a shipwright in Aberdeen and proved himself adept at learning his new trade, sometimes voyaging as a ship’s carpenter. By the age of 30 he was proficient in the much more difficult business of ship’s drafting and was taken into partnership with Gibbon and James Cochar, a knowledgeable shipbuilder also skilled in the art of ship draughtsmanship. At this time trade between London and Aberdeen began expanding but as the only land communication north of Edinburgh was by stage coach the bulky nature of the goods to be transported necessitated movement by sea. Hall was thus in an ideal position to build tried and tested schooners which provided fast, safe and regular passages to and from London and which could hold their own against paddle steamers. By 1830 the business had been taken over by Hall’s two sons James and William. It is to William, the designer that credit must go for the first clipper ship design. Using highly original, ingenious and effective studies of ship models in a glass testing tank , the design for the first clipper ship “Scottish Maid”, 142 tons, evolved. With fine lines, extreme fore-raked clipper bow, she proved to be a fast, safe vessel, frequently making the journey to London in 49 hours. So successful was the design that Messrs Hall had orders to construct vessels to successfully trade in every part of the globe. Scottish Maid, built in Aberdeen in 1839 by Alexander Hall & Co, was a revolutionary design of fine schooner. Her design followed the results of early tank testing of the fine clipper hull shape that was to mark the great clipper ships. Commissioned by a co-partnership in shares of 1/64ths, she was built to compete with the new paddle steamers between Aberdeen and London. She was used in that trade by Nicol and Munro, but was not, however, competing with mail-packet steamers as often claimed. She was the first vessel of true clipper design to be built in Great Britain or elsewhere, and Halls made her design details publicly available. The first ship-rigged clipper hull was the Glenantar built by Halls in 1842. The earlier Baltimore Clippers were not clipper hulls of the sort used by the great clipper ships. The clipper ship Rainbow built in the US caused a revolutionary stir in ship design in the US, but was commissioned only in 1843 and launched in 1845. The Hall family had an interesting history, considered here.