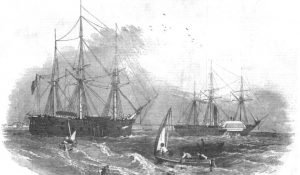 This article provides an account of H.M.S. North Star’s failed attempt to contact Arctic Explorer, Captain Sir James Clark Ross in the Arctic between 1849-50. During this voyage the vessel (built at Woolwich, 1819-20) was under the command of James Saunders who directed sixty-three officers and men on the search. The North Star would eventually spend the winter of 1849-50 frozen in, where its crew encountered natives of the continent before returning to England.