Watering the Fleet and the Introduction of Distillation 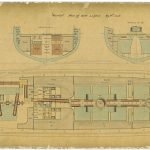 From the 14th Century it had been known that Arab chemists had distilled fresh from seawater; and throughout the 16th, 17th and 18th Centuries individual scientists and shipmasters had experimented with distillation.  This covers the history of distillation of water on ships at sea and experiments conducted by James Lind during the eighteenth century. An early distillation apparatus, designed by Lind, was installed on board the Endeavour during Cook’s first voyage of discovery. Attempts were made in the nineteenth century to interest the Admiralty in installing distillation apparatus on naval vessels but little was achieved until the advent of the steam engine when large volumes of steam became available from ships’ boilers.  A distillation apparatus was installed in HMS Warrior in 1861 and it subsequently received widespread acceptance.  Until the 19th Century the carriage of water at sea was a continuing problem. In casks it became foul, while the use of lime and charcoal, and of lead and iron tanks, had their drawbacks.  With the advent of steam the process became entirely practicable, and the Admiralty adopted distillation in 1868.