Where did Drake Careen the Golden Hind in June/July 1579? A Mariner’s Assessment 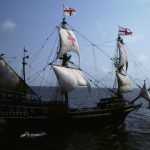 In June 1579, the treasure-laden Golden Hind was off the Pacific coast of North America. The article reassess how far north Drake sailed and where he prepared his ship for a Pacific crossing. Off Foulweather Cape, cold and foggy weather forced a return southwards in search of a harbour. The author argues, with maps and photographs, that Drakes Bay, east of Point Reyes at 38°N is the careenage. The evidence considered includes alternatives, landscape descriptions, off-lying islands, climatology, astrolabe accuracy and Chinese ceramics.